The ESD bomber is a quad engine hybrid bomber that is used by the Earth Space Defense. It has two anti-gravity engines under each wing with a central bomb bay.

The bomber was used during the War of 2016 against the Harvester Mothership. Bombers were sent to enter the massive ship and deploying cold fusion bombs inside, thus inflicting massive damage and killing the Harvester Queen. However, the Harvesters foiled the attack by deploying an electromagnetic-like weapon which disabled the bombers and their payload were intercepted by alien drones, which they contained the explosions with energy shield bubbles. 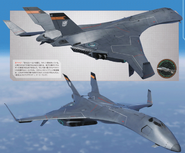