Independence Day: Resurgence
The Fighter is a Harvester fighter craft. It is an updated version of the Attacker in which it is armed with much more rapid energy blasters and equipped with fast-flight capabilities.

In contrast to the Attacker, the Fighter is dedicated for combat with a small cockpit area with tandem seating, with the gunner in front and the pilot in the back. It is far more mobile and responsive than the H-8 Global Defender.

Fighters, ranging in the thousands, or possibly millions, participated in the War of 2016 and were first seen defending the Mothership from the Earth Space Defense, and attacking the Cheyenne Mountain Complex.

Several Fighters were hijacked by surviving ESD pilots (including Jake Morrison, Dylan Hiller, Charles Miller, and Rain Lao) from inside the Mothership.

Fighters later accompanied the Queen in attacking Area 51. The Fighters were then telekinetically controlled by the Queen to form a shield surrounding her when she directly participated in the attack. The Fighters piloted by the ESD pilots were instrumental in killing the Queen. Immediately following the Queen's death, the Fighters' pilots were rendered inactive and causing their vessels to either crashing into the ground or colliding into each other. 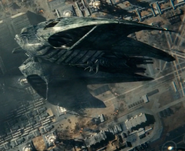 Fighters on a landing platform. 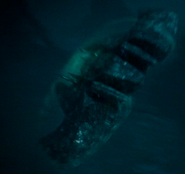 Head-up display of a Fighter.

A tornado of Fighters surrounding the Harvester Queen.

Thousands of Fighters attacking ESD Global Defenders. (Note: this scene is not from the film; it's from a commercial.) 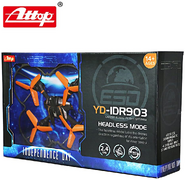 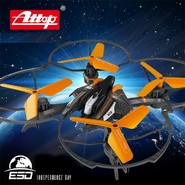