The H-8 Global Defender is a hybrid aerospace fighter developed for the Earth Space Defense.

The Global Defender is equipped with twin hybrid anti-gravity fusion drives that allows it to have rapid acceleration in space and VTOL movement. The hybrid fighter is armed with two underwing rapid-fire blaster cannons similar to the Attacker. Moreover, the fighter have an integrated built-in life support system which allows a pilot to breathe without the use of an oxygen mask.

The Global Defender was originally equipped with deflector shields that was scrapped from the final design due to the shields drains energy from the fusion drive and creating more drag during atmospheric flight.[1]

In 1999, the ESD experimented with integrating alien shield technology into an F-22 Raptor that would became the foundation for the development of Hybrid Fighters. The H-8 Global Defender was first introduced in August 2014.

The Global Defender was the main fighter of the ESD, and was the mainstay of Legacy Squadron. 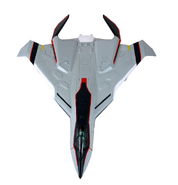