"She has arrived."
―An alien announces the arrival of the Queen.

The Harvester Queen served as the leader and matriarch of the Harvester species. The Queens are significantly larger than their drones, and represents the will and consciousness of their species.

"There must have been a Queen up there that we didn't know about."
―David Levinson

A Harvester Queen was behind the invasion of Earth during the War of 1996. The invasion failed when the mothership was destroyed by a nuclear warhead, killing every Harvester including the Queen on board.

"No one has ever killed a Harvester Queen..."
―The Sphere

In July 2016, a Queen received a distress signal sent from the Harvesters that survived the War of 1996 and prompted her to launch a second invasion of Earth, intending to avenge the first invasion and rip the planet's resources. The Queen's massive mothership effortlessly destroyed Earth's orbital defenses and nearly wiping out humanity's military before proceeding to drill into Earth's molten core that would destroy the planet in the process.

The Queen later learned that the Sphere was present on Earth and departed from her mothership to claim it. Unknown to the Queen, the Earth Space Defense anticipated of her coming and lured her into a trap via a cold fusion bomb attached to a copy of the Sphere's frequency. However, the Queen survived the attempt on her life due to her personal energy shield. The Queen led her forces to attack Area 51 to capture the Sphere. Ultimately, her shield was disabled in combat and was fatally wounded by ESD pilots. With the Queen dead, all alien forces were rendered inactive and forcing the mothership to cease drilling and retreating from Earth.

The Queens are massively large, standing roughly 200 feet tall. Unlike the bipedal Harvester drones, the Queen possess six limbs, two arms and four legs, somewhat resembling to Earth insects. Also unlike the regular Harvesters, they have a visible a mouth and vocal chords.

Like the regular Harvesters, Queens have their own bio-mechanical suit in which it is equipped with a shield generator, which is capable to withstand against a cold fusion bomb.

The Queen holding her gun.

The Queen is now forced to expose herself from her bio-suit. 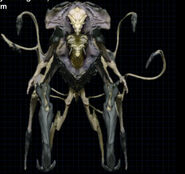