"That is definitely bigger than the last one."
―David Levinson

The Harvester mothership is a massive spaceship used by the Harvesters. The mothership was designed for stripping planets of their natural resources. A mothership participated in an attack on Earth during the War of 2016.

The mothership moves at a steady pace and is surprisingly fast for its size, being able to travel from Saturn to Earth in only one day. It is mounted with powerful energy cannons that can be arced into multiple beams that are able to shoot multiple targets simultaneously. Like the other alien ships, the mothership is equipped with a deflector shield that could withstand the ESD Moon Base's energy cannon.

The mothership possessed a cloaking device which allows it to reach the Moon before the ESD even realized its arrival, giving them virtually no time to prepare and allowing the mothership to land with virtually no opposition.

The mothership harvest planets by latching on the surface with massive landing struts and from its center a direct beam of plasma is drill into the planet's core which sucks magma into the vessel.

The mothership resembles a massive disc similar to the City Destroyer; size-wise it is much larger than the mothership that attacked Earth in 1996 and covered an area roughly the size of Earth's moon's surface.

The interior is vast, containing what is essentially the aliens' civilization: military, social structure, transport, communications hubs, and a form of agriculture.[1]

The ground level serves as some kind of agricultural system with an unknown species of plants are grown in giant fields. Harvester drones are used to reap these fields.[1]

Throughout the mothership are massive control towers, towering 175 kilometers high, at which they serve as a air-base for Fighters that are docked on platforms.[1]

The mothership made its first appearance to humanity on July 4, 2016. It first arrives over the Moon, prompting the ESD Moon Base to fire the moon cannon on the ship. However, the attack is deflected by the mothership's shields. In response, the mothership fires an direct energy beam that destroyed the Moon Base. The mothership continued its approach to Earth and easily destroying the Orbital Defense System. Due to the mothership's massive size and gravity, entire cities from Asia and the Middle East were uprooted until it lands over the North Atlantic Ocean and causing the lifted structures and debris to rained over Europe. Its landing annihilates the entire United States East Coast and much of northwestern Europe. The Mothership then proceed to drill downward to the Earth's molten core.

The Earth Space Defense launched an ill-fated assault on the mothership in an attempt to eliminate the Harvester Queen. Several bombers armed with cold fusion bombs entered the ship and were disabled by an electromagnetic pulse emitted by the aliens, and the bombers were neutralized by drones. However, the ESD managed to lure the Queen away from the mothership after tricking her into following the location of the Sphere, and managed to kill her. The death of the Queen caused the mothership to cease its drilling and retreat from Earth.

The mothership seen from above.

Crossing over the Moon[]

The Mothership's shadow looms over the Van de Graaff crater.

The Space Tug is pulled in by the mothership's gravity.

The Mothership approaching the ESD Moon Base.

The Moon Base prepares to fire the Mothership.

The Harvester Mothership is about to destroy Moon Base.

The mothership over the Moon.

The mothership preparing to fire on Earth's Orbital Defense System.

One of the mothership's landing struts lands on Washington, D.C.

The White House being slightly damaged by the strut.

A landing strut in Morocco.

The mothership about to launch a devastating electromagnetic pulse.

Jake Morrison distracting some Harvesters inside a control tower to allow his companions to steal Fighters.

Side-view of the same control tower.

Seen from a ship in the Atlantic Ocean. 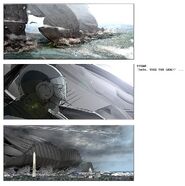 "Something that I've learned from [Roland Emmerich], which was such a great lesson, is that he believes in keeping it as simple as you can: The spaceship's a disc. He likes the most straightforward and simple idea you could have. It'll get super complicated by itself. If you start with a complicated thing, you'll have a Gordian knot, you'll have something like that which you'll never solve visually."
―Johannes Mücke