The Harvester soldiers in the War of 1996 have a different type of bio-suit, because if you were to look at the bio-suit in the original Independence Day film, you would notice that the legs in the original only have 3 joints, and the new soldiers have 4. You can also notice how the technology base changed, like how the new Harvester bio-suits have plasma guns attached to their body.

When Steven Hiller and David Levinson were flying into the Colony mothership over Earth, they could see thousands or millions of soldiers preparing for an invasion. Of what we were able to see in Independence Day, one of the ships was a Troop Transporter, which had a triangular shape to it, with a rounded large sticking out the bottom, and had lines of Harvester soldiers boarding the shuttle, plus when Steven Hiller and David Levinson were escaping from the Colony ship you could see 4 of the exact same ships leaving the colony ship. The Harvester soldiers there died in the blast.

After the Earth Space Defense lost the battle to destroy the Queen's ship, these troops were tasked with finishing off any pilots who survived. However, the surviving unit held their breath and hid underwater while the Harvester soldiers were looking for any trespassers. After seeing no one, the Harvester soldiers left the area.

Several also assaulted Area 51 after the IDR Queen breached the ESD base. They had found the Sphere and attacked human soldiers, which also led to the death of Milton Isaacs, and Brackish Okun grieved about his death. However, they were shot to death by Okun, Dikembe Umbutu, and military guards, but the Queen was able to detect the Sphere shortly after the assault.

After the Queen's death, the Harvesters left on their Mothership back to their homeworld to find another Harvester Queen to lead their hive.

Thousands of Harvester soldiers (bottom right corner) preparing for an invasion.
Add a photo to this gallery 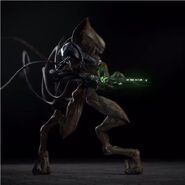 Animated GIF of Alien Soldier.
Add a photo to this gallery
Retrieved from "https://independenceday.fandom.com/wiki/Harvester_soldier?oldid=20884"
Community content is available under CC-BY-SA unless otherwise noted.