Chairman of the Joint Chiefs of Staff, acting President of the United States

Independence Day: Resurgence
Joshua T. Adams was a United States four-star General who served as Chairman of the Joint Chiefs of Staff, the highest-ranking and most senior military officer in the United States Armed Forces. During the post-War of 1996, Adams helped in foiling an alien attempt to devastate the North Atlantic seaboard via artificial tsunamis. During the War of 2016, he became the sole surviving member of President Elizabeth Lanford's Cabinet and was quickly sworn in as an acting President of the United States.

Joshua T. Adams was born in 1958 to a naval service family in the Midwestern United States. At a young age he developed a natural aptitude for problem-solving age, despite early struggles with his education.

Majoring in mechanical engineering at Ohio State, Adams had an initial interest to pursue a career in the United States Navy but was cut short when his sister, Erin, died in a tragic boating accident that left Adams with a lifelong fear of the ocean.

He eventually found solace and meaning in the U.S. armed forces, receiving numerous commendations over the course of his career - including the Legion of Merit - for his service in Afghanistan and South Korea. By 1994, he had achieved the rank of Captain.

During the War of 1996, Adams maintained a key position as part of US intelligence, using his expertise in military strategy to help coordinate the global assault that would serve as humanity's principal reprieve from the extraterrestrial threat. With the alien mothership destroyed, Adams' familiarity with the alien methodology, technology, and mindset marked him as the prime candidate for a military investigation of an additional extraterrestrial craft, newly discovered at the bottom of the Atlantic Ocean.

Adams was eager to serve his country and his planet, but was still battling his thalassophobia. However, he eventually assented to this new mission. Adams discovered surviving aliens attempting to create artificial tsunamis in the Mid-Atlantic Ridge and managed to stop their plot by destroying their ship.

Sometime after 1996, Adams spent the next twenty years coordinating efforts to reverse-engineer alien technology. By 2016, he had been promoted to the rank of four-star General and was appointed as Chairman of the Joint Chiefs of Staff. Making General Adams as the nation's highest ranking military officer and the principal military advisor to the President, the Secretary of Defense, and the National Security Council.

During the upcoming 20th anniversary of the War of 1996, Adams was preparing to spend the celebrations with his wife in an expensive suite when he was abruptly summoned to Area 51 in regards to the sudden activity of the alien prisoners that were once catatonic since the end of the war, as shown to him by Lt. James Ritter. Adams attempted to contact Director David Levinson but he was unreachable, as he was in the National Republic of Umbutu. Later, Ritter notified Adams about an unknown phenomenon that appeared near Saturn and destroyed Rhea Base, which prompted him to escalate Earth's alert level to red, and called his wife to go to her sister's home.

When an unknown alien ship appeared on the Moon, Adams suspected the ship to be tied to the destruction of Rhea Base and mentioned this to President Elizabeth Lanford, who believed that the ship was preparing for an attack on Earth. The ship was then shot down by the ESD Moon Base. But a day after, the aliens from the War of 1996 returned in force in the form of an enormous mothership. Adams immediately canceled the celebrations and activated Earth's defense systems. Unfortunately, Earth's defenses were not able to stop the mothership, which effortlessly destroyed the Orbital Defense System and made landfall.

Adams later oversaw a counterattack against the mothership to eliminate the alien's Queen to stop their excavation of Earth's core. But the counterattack was brutally repulsed by the aliens. The situation further worsen when Adams learned that President Lanford and all seventeen members of the presidential line of succession were presumed dead after aliens breached the Cheyenne Bunker; in which Adams was effectively left as the highest-ranking officer in the U.S. government and was unprecedentedly sworn in as the acting President of the United States.

Shortly after his sudden ascension, Adams was summoned to seeing the container that was recovered from the alien wreckage on the Moon and learning that the container released its passenger, a virtual intelligence, which informed its human audience that it was sent to rescue humanity. Upon learning the "Sphere's" importance to the invaders, Adams approved and oversaw David Levinson's new plan to kill the alien Queen. Following the Queen's death and the aliens' subsequent retreat from Earth, Adams congratulated Levinson. 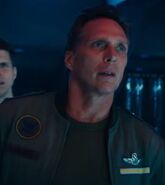 "I understand that many people around the world are tuning into this channel on their shortwave radios. To you out there and here at home make no mistake, this is humanity's last stand. What we do in the next 12 minutes will either define the human race or finish it. To those of you listening no matter your nationality, color or creed I ask that all of you pray for us. No matter our differences, we are all one people. Whatever happens...succeed or fail...we will face it together...standing as one."
―Joshua to the people of the world.