First Lady of the United States

Marilyn Whitmore was the former First Lady of the United States and the wife of Thomas Whitmore.

Marilyn was regarded as a popular figure among the ordinary Americans due to her ground-to-earth style behavior and no-nonsense manner of speaking to the public. While her husband's presidency floundered, Marilyn became the the administration's potent political weapon to deter its reputation.[1]

Marilyn was attending a campaign fundraiser in Los Angeles during the War of 1996. She had planned to evacuate to Nellis Air Force Base but chose to remain longer in the city to keep the public calm in the midst of the crisis much like her husband in Washington, D.C. Marilyn was being escorted out of the city by helicopter but wasn't able to escape from the ensuing devastation in which her helicopter crashed that left her gravely wounded. She was found by Boomer, the pet dog of Jasmine Dubrow, who takes her and other survivors to the ruins of El Toro in an attempt to find help.

Captain Steven Hiller arrived at El Toro with an acquisition helicopter and took Marilyn and the other survivors to Area 51, where her family were located. Doctors soon learned that Marilyn has internal bleeding that has been going on for too long and it is impossible to save her. Whitmore tries to console her that "The Doctors say everything is going to be alright" even though they both know this is not the truth. She playfully calls him a liar as they have their final moment together. 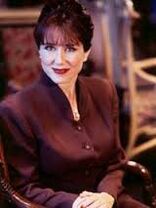