Motherships are massive command vessels used by the Harvesters. They are commanded by Supreme Commanders that take their orders directly from Harvester Queens.

A mothership is of considerable size: it is almost 600 kilometers long across its longest axis (length) and five hundred and fifty kilometers along its shortest (height). It is made up of two visible portions: an irregular dome on top, and two flipper-like appendages that hang beneath.

The outside resembles two overlapping fields of stilled lava, with a thin blue shield around it. It maintained 83 City Destroyers and probably millions of Harvester aliens.

There are many tunnels that led to the inside of the ship, of which at least one had a triangle-shaped passage. It was through this one that Steven Hiller and David Levinson were led to the control center of the mothership.

The center of the ship lies in a thick blue mist. Surrounded by towers, on the base is a plateau of eighty kilometers long on which armies of thousands (possibly millions) of Harvesters were preparing for the invasion of Earth. Above this plateau there is a long beehive-like structure which is the main transportation center of the mothership. This is where Steven and David were led to. This structure has thousands of openings, and out of each openings comes a strong light. These are control rooms in which the aliens control the arrival and departure of the thousands of vessels. Through long structures they connect the fighters with the Mothership. At the core of this structure was the main control and command center where hundreds of alien technicians monitored the ship's various functions along with their invasion.

In 1996, a Harvester Queen sent a mothership to Earth, and causing the events of the War of 1996. Throughout the duration of the conflict, the mothership hid behind the Moon, making it almost impossible for humanity to observe it. However, Steven Hiller and David Levinson infiltrated the vessel with a captured alien spacecraft and disabled the force-fields of the City Destroyers. Thereafter, the infiltrators detonated a nuclear missile inside the ship which completely destroyed it. Burning pieces came crashing down to Earth, creating multiple falling stars for those on the planet looking up.

As of 2016, the remains of the ship that weren't claimed by Earth and the Moon's gravity were left in an enormous debris field.[1] They were eventually pushed away by the Harvester Mothership's deflector shield during the War of 2016. 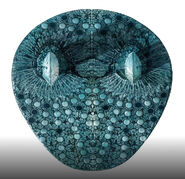 A artist's view on the inside of the mothership.

The Area 51 attacker closing in on the mothership.

An alien controller.
Add a photo to this gallery

Mothership debris as seen from a moon tug.

Debris being pushed away by the Harvester Mothership.
Add a photo to this gallery

Retrieved from "https://independenceday.fandom.com/wiki/Mothership_(ID4)?oldid=20873"
Community content is available under CC-BY-SA unless otherwise noted.