"Well, you know I like to make an entrance."
―Steve to Jasmine.

He was a war hero of the War of 1996 in which he participated in the destruction of the alien mothership. Following the war, he was promoted to Colonel and enlisted in the Earth Space Defense. In 2007, he tragically died test piloting the ESD's first alien hybrid fighter.

Steve had aspirations of becoming an astronaut. But despite his excellent service record, he was rejected by NASA.

When the aliens arrived on Earth, Steven and his girlfriend Jasmine Dubrow slept unaware until waking up that morning to see a City Destroyer hovering over Los Angeles. Steve was called back from his leave despite Jasmine's protests and fear. To reassure her, he asked Jasmine to bring herself and her son Dylan to stay with him at El Toro.

After the aliens began their attack, Steven led the Black Knights in a counterattack on the City Destroyer near what remains of Los Angeles. The counterattack became a disaster as the Destroyer and its attackers were equipped with energy shields that made them invulnerable to conventional weapons. Steve's entire squadron was wiped out, forcing him and his wingman Jimmy Wilder to flee while being chased by attackers. Jimmy was soon killed during the pursuit. However, Steve managed to down one of his pursuers with his jet's parachute and crash their aircraft in Nevada. Steve approached the downed attacker and subdued its alien pilot by punching it in the face.

Steve took the unconscious alien captive and dragged it across the Nevada desert until he was rescued by a large convoy of refugees, to which Steve was offered a lift by Russell Casse. Steve helped guide the convoy to Area 51, where he presented the alien as his "clearance" and granted the refugees access to the base. After the alien was taken to isolation, Steve then requested General William Grey for permission to return to El Toro, but only to learn that the base was destroyed, leading him to believe that Jasmine and Dylan are dead. Unknown to Steve, they had survived and arrived at El Toro after the attack. Hiller later took a helicopter and flew to El Toro where he was relieved to see Jasmine alive along with several survivors, including First Lady Marilyn Whitmore. He then brought them back to Area 51.

When a plan was first proposed to launch a counteroffensive against the invaders, Steve volunteered to be the pilot of the repaired attacker, with David Levinson accompanying him, to infiltrate the alien mothership, implement a computer virus into its systems to disable the aliens' shields, and plant a nuclear missile on board the vessel; Hiller reasoned that he had seen the alien ships in action and was thus uniquely qualified to adapt to what it was capable of in flight. Prior to their mission, Steve officially married Jasmine. Steve and David successfully carry out their objective and barely manage to escape as the nuclear warhead completely destroys the mothership and ends the alien threat. The two safely crashed land in the desert near Area 51 and were greeted by their families and congratulated by President Whitmore.

Despite the aliens' defeat, Hiller participated in neutralizing surviving alien remnants in Russia.[1]

Some years following after the invasion, Steve and his family temporarily lived in a rebuilt Washington, D.C. until moving to Nevada in which he joined the Earth Space Defense, serving as a test pilot and flight trainer.[1] He was sent to China as a technical advisor and became acquainted with Jiang Lao and his niece Rain Lao, to whom he gave the latter an autograph.[1]

In 2007, Hiller volunteered to test flight an experimental alien hybrid fighter while realizing the potential hazard of the aircraft. He demanded that Levinson, who had been thrown off the hybrid fighter project for voicing against the test flight, be reinstated before his demand was accepted. David examined the fighter for two days and did not find anything conclusive. Hiller, however, conscientiously refused to have inexperienced pilots be put in danger in the fighter. He flew the fighter in the 2007 ESD Spring Expo; in which the aircraft malfunctioned, causing it to violently explode, killing Hiller.[1]

Hiller's death was heavily publicized during which time the Lucas Jacobs administration came under fire for gross negligence for rushing the prototype hybrid fighter before it was ready. The incident also caused David Levinson to become Director of the ESD in order to prevent similar government negligence over the ESD.[1]

Years later, the retired President Whitmore, whose mind had been corrupted by alien telepathy, mistakenly claimed that the aliens were responsible for Hiller's death, having killed for revenge.[2] 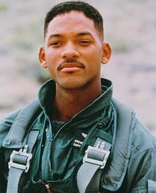 Headline news reporting on the death of Steven Hiller.

"Look, I really don't think they flew 90 billion light years to come down here and start a fight. Get all rowdy."
―Steve trying to calm Jasmine.

Watson: "Something you want to add to this briefing, Captain Hiller?"
Steve: "No, sir, just a little anxious to get up there and whoop E.T.'s ass, that's all!"
— Steve joking to Captain Watson.

"Oh you did NOT shoot that green sh*t at me!"
―Steve on being fired on by alien attackers.

"Welcome to Earth!"
―Steve after punching out an alien pilot.

"[puts a cigar in his mouth] Now that's what I call a close encounter."
―Steve commenting on the alien that he punched out.

"You know, this was supposed to be my weekend off. But noooo. You got me out here dragging your heavy ass through the burnin' desert with your dreadlocks sticking out the back of my parachute. You gotta come down here with a attitude, acting all big and bad. And what the hell is that smell?! [screams and kicks the alien] I could've been at a barbecue! [kicks the alien one last time and calms down] But I ain't mad."
―Steve ranting to the unconscious alien.

"I have got to get me one of these!"
―Steve flies the alien attacker.

"Peace!"
―Steve launching the nuke at an alien.

"Elvis has left the building!"
―Steve after narrowly escaping the alien mothership.

"Didn't I promise you fireworks?"
―Hiller to Dylan, watching the remains of the mothership burning up in the atmosphere.