Thomas J. Whitmore (1953–2016) was the 42nd President of the United States from 1993 to 2001. Prior to his interest in American politics, he was a fighter pilot who fought in the Gulf War. Whitmore was a major figure in leading the United States through the War of 1996 and after the conflict was largely revered as a hero. He was subsequently re-elected for a second term as president. Whitmore remained a prominent figure in both the United States and the world long after his term ended in 2001.

Whitmore was a major proponent of the Earth Space Defense initiative, in which he appointed David Levinson as the ESD's Civilian Director. Near the conclusion of his second term in office, Whitmore convinced his Joint Chiefs of Staff Chairman General William Grey, to run for president against disgraced former Defense Secretary Albert Nimziki.

He later fought in the War of 2016 and sacrificed his life to help stop the Harvester Queen.

Thomas Whitmore fought in the Gulf War as a F-16 fighter pilot in the United States Air Force and later took an interest in politics. He enlisted his friend and classmate from Harvard, Constance Spano, as his campaign manager to help him getting elected to Tennessee's Second Congressional district in which he held the seat for two more terms.[1] He was eventually elected as President in 1992, beginning his first term in January 1993, because of his war experience, as well as his hopeful youth.

Whitmore also made Constance as his White House Press Secretary. He was acquainted with Constance's ex-husband David Levinson since attending their marriage.[1] This ended on bitter terms when a physical altercation ensued between them in which Levinson accidentally and falsely believed that his ex-wife was having an affair with Whitmore.

During his first years in office, he had introduced major legislative initiatives to reform everything from the legal system to health care to the environment. However, these programs had been stalled by committees and lawmakers. Against the advice of his advisers, Whitmore spent most of his time and energy shepherding his bills through the process, allowing himself to be bogged down by first-term representatives, which he was often forced to make favors with policymakers to achieve his policies.[2] As a result, public opinion openly attacked him for his meek outlook and inexperience in politics, and his prestige and popularity plummeted.

On July 2, 1996, Whitmore was discussing with Constance Spano regarding on his damaged public image until he received a phone call from Secretary of Defense Albert Nimziki informing him about the arrival of the alien visitors. As Whitmore tries to lead his nation through this dire event in what became known as the War of 1996, he chose to stay in Washington, D.C. rather than to evacuate with his Vice President, The Cabinet, and Joint Chiefs of Staffs to NORAD in order to address and calm the American public.

When attempting to establish communication with the City Destroyer over Washington, Whitmore was warned by Levinson that the aliens came to Earth with hostile intentions. Levinson's warning was confirmed when the City Destroyer vaporized the helicopters that attempted to make contact. Whitmore then immediately issued a large-scale evacuation order in the targeted cities, but his orders were too late as the aliens destroyed the cities. Whitmore, his daughter Patricia, Levinson, and his staff narrowly escaped the destruction of Washington on Air Force One. The aftermath deeply affected Whitmore, who lamented for his indecision to prepare for the aliens' hostility from the beginning, and believing his wife to be among the dead.

Whitmore later oversaw a military counterattack against the aliens, from onboard Air Force One. However, the counterattack was an abysmal failure as the alien ships were equipped with energy shields that repels any sort of attack. The aliens retaliated by destroying many U.S. military installations, including NORAD where the Vice President and Joint Chiefs of Staff were. Following the failed counterattack, Whitmore was urged by Nimziki to order a nuclear attack against the aliens. A suggestion that Whitmore was hesitant of having nuclear weapons deployed on American soil. An argument ensued in Air Force One's onboard conference room between Whitmore, his staff, and Levinson until the latter's father, Julius Levinson, interrupted and accused the President and his advisors of having previously known of alien life by basing on the Roswell incident and Area 51. Whitmore was humored by Julius' accusation, but Nimziki sheepishly admits to him that these were true.

Nimziki informed Whitmore that the government had known about extraterrestrial life since 1947 and had contained an alien ship and its deceased occupants in Area 51, but the President was kept deliberately ignorant of this discovery. Whitmore had Air Force One land at Area 51, where he meets and acquaints himself with Dr. Brackish Okun, the chief scientist of Area 51, and Major Steven Mitchell, the base's commanding officer. After learning what Dr. Okun knew about the aliens, Whitmore and all of his aides and associates including Levinson team up with Area 51's research scientists and military staff to come up with a way to defeat the invaders.

During that day, an alien was captured and taken to Area 51. Whitmore intended to have the creature interrogated, but it managed to escape and took control of Dr. Okun to communicate with Whitmore. Whitmore demanded what its kind want, after which the alien launched a psychic attack against him. Whitmore saw the creature's memories and learned that the aliens act like locusts, attacking planet to planet while consuming their natural resources at the cost of annihilating entire civilizations - in which Earth is the most recent target. After the captured alien was killed by his security detail, Whitmore reluctantly authorized a nuclear attack. But an attempt on a City Destroyer over Houston failed to penetrate its shield, in which Whitmore realized the futility and immediately called off the attack.

Whitmore was later relieved that Marilyn was found alive and taken to Marine Corps Air Station El Toro by Jasmine Hiller, along with several other survivors. Jasmine's boyfriend (later husband), Captain Steven Hiller brought Marilyn to Area 51, where she is immediately admitted to the base's state-of-the-art in-house hospital. However, Whitmore learns from doctors that his wife suffered from internal bleeding and will soon die. Whitmore had one last moment with Marilyn before he and his daughter comfort each other.

On July 4, Whitmore and his aides learned from Levinson that he finally devised a plan to defeat the aliens by disabling their shields via infiltrating the alien mothership with Area 51's captured ship and uploading a computer virus into their system; allowing an ample amount of time to coordinate a global counterattack against the aliens. Whitmore accepted David's plan and decided to personally lead the counterattack, as he was also a fighter pilot. He decides to fly a F/A-18 Hornet, given its avionic similarities to the F-16s he had flown in the Gulf. But before he does so he delivers his famous motivational speech to the men and women in the upcoming battle.

Once the shields were successfully brought down, Whitmore leads in the defense of Area 51 from a City Destroyer. He and his wingmen team up with retired USAF volunteer and fellow F/A-18 pilot Russell Casse to provide him cover fire from their F/A-18s' M61 Vulcan cannons, while Casse prepares to fire the last remaining AMRAAM missile from his F/A-18 at the alien ship's main weapon. After the missile failed to fire, Casse sacrificed himself by flying his jet into the ship's weapon and setting off a chain reaction that brought it down.

Soon military forces throughout the world were making similar successful attacks against the invaders after Levinson and Hiller managed to destroyed the mothership with a nuclear warhead and spelling the aliens' defeat. Whitmore personally congratulated Levinson and Hiller as they watched the wreckage of the mothership burning up in the atmosphere with their families and other military personnel.

Whitmore was re-elected for a second term as president following his leadership in the War of 1996, and he remained a popular figure in both his country and the whole world long after his term ended in 2001. He was a proponent of the Earth Space Defense initiative, which he also appointed David Levinson as the ESD's director, and convinced William Grey to run for president.[3]

Following the death of Steven Hiller in the 2007 ESD Spring Expo, Whitmore, traumatised by the death of his good friend, became a recluse due to a decline in his mental health. This was in fact due to his traumatic experience with the captured alien in 1996 that rendered him with a mental imprint of seeing images through the aliens.[3]

In 2016, as the world prepared to celebrate the war's 20th anniversary, President Elizabeth Lanford began the celebrations by unveiling a commissioned portrait of Whitmore to honor his 'valor and leadership to unite the world and lead humanity from its darkest day to a brighter future.'

When a new alien assault began to approach Earth, Whitmore attempted to warn the people at a public address at the White House, but it was assumed that he was simply suffering another breakdown until the attack actually started. After the first assault decimated Earth's two decades of advances and their initial plans failed, Levinson became concerned that their years of planning meant nothing, but Whitmore rallied the men at ESD headquarters by reminding them that they hadn't stood a chance last time either, and the important thing was to keep on fighting.

On July 4th 2016, Levinson and Dr. Okun devised a plan to expose and defeat the Harvester Queen by tricking her into capturing a tug filled with fusion bombs by broadcasting a signal matching the alien sphere they had retrieved earlier. Although Patricia was willing to volunteer for the assignment, the former president took the tug instead, convincing his assigned bodyguard Matthew Travis to let him go by appealing to Travis as a friend and a fellow father, rather than as a former president.

Patricia intercepted the tug, leaving Whitmore pleased to see her in the air once more. Whitmore explained that he wasn't saving the world this time, but rather his daughter. Spotting enemy fighters approaching, Whitmore requested Patricia give him cover to fly his tug within the Queen's ship and Patricia complied. Once clear, Whitmore flew inside the ship where he came face to face with the surprised Queen. Once Levinson raised a shield around the area, Whitmore told the Queen "on behalf of the planet Earth, I want to wish you a Happy Fourth of July" before detonating the bombs, killing himself and destroying the Queen's ship. However, the Queen herself survives the blast due to a personal shield but Patricia and ESD pilots Jake Morrison, Rain Lao, Charles Miller and Dylan Hiller are able to finish what Whitmore started. 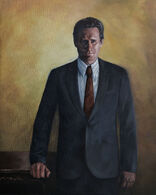 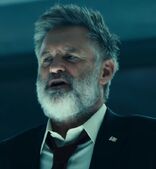 Retrieved from "https://independenceday.fandom.com/wiki/Thomas_J._Whitmore?oldid=20879"
Community content is available under CC-BY-SA unless otherwise noted.